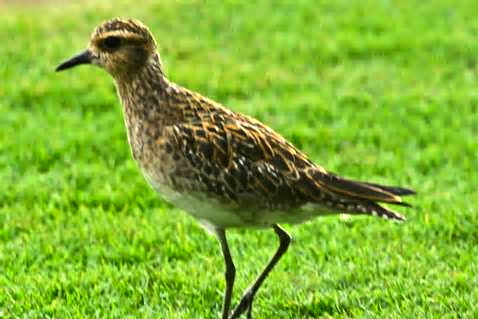 We named her Katie (Keke in Hawaiian). Kolea is Hawaiian for golden plover. It’s botanical name is Pluvialis fulva which sounds like an organ

from which a gynecologist might take a pap smear. Or..in the case of the male..it could be the title of the next spy flick: Agent 007–The Man with the Golden Plover. Appropriately..a plover is a bird.

And a rather amazing bird at that. “Our” tougher plover just left us for its winter home. If you want a lesson in perseverance, endurance, risk-taking and all-around spunk–this is the bird to teach you that. Katie arrived on our lawn last year in August. We weren’t able to pinpoint the exact date because we were “off-island” then, but we do know that our plover departed three weeks ago on April 26th.

And “Where for art thou flying?” you might ask this feathery little shorebird. Well..all the way back to the western shores of Alaska from the Hawaiian

Islands–50 non-stop hours going about 50 mph at 20,000 feet with wings flapping (about two wing-beats per second) over 2,500 miles of open ocean! No coasting, no soaring, no gliding. And if you think that’s bad, koleas can’t swim! Ornithologist, Dr. Oscar “Wally” Johnson, put it this way, “Imagine that flight you made from L.A. to Honolulu–only without a plane.” And we complain because we’re in the back of coach and airlines seem to be slowing flights these days to save fuel.

These brown speckled birds start refueling and fattening themselves up the minute they touch down in Hawaii on our verdant lawns or golf courses–sometimes interrupting play on the back nine. Their on-land stride is a kind of “run-run-run–lift up a leg–stop–run-run” across the lawn with their beaks at the ready to snatch any beetle, cockroach, worm, centipede or creepy crawly–anything munchable underground.

Katie chose our rolling lawn as her territory. She staked it out and defended it at all costs..scaring away any other kolea who might think of

moving in for a snack as she flew after him with a shrill whistle and flapping wings. That way she protected her food source to be sure she had enough to last before her return trip. This is called “site faithfulness” and that’s why Katie reclaims our lawn every year now. It’s just unbelievable that she knows how to get here. She must have her own little GPS. Someone should put a Google Glass on her so we can see what her trip is like flying back to Alaska.

Kolea in Hawaiian means “one who takes and leaves.” Similar to when the kids head off to college..or when distant relatives come for a visit to your home on Maui. According to a Hawaiian proverb: “Ai no ke kolea a momona hoi I Kahiki!” or..the kolea eats until he is fat and then returns to the land from which he came. And the main reason for doing this is breeding. Of course–it’s always about sex. But here’s what a few parents I’ve known wish they could have done. Once kolea chicks are born, parents leave them mainly on their own to fend for themselves. When the adults leave for Hawaii (after chirping “Aloha, goodbye and good luck”), the kidlets are left to follow a few weeks later in a teen-age group all by themselves and somehow find their way to Hawaii.

Another interesting fact of nature is that the kolea usually precedes the humpback whale’s arrival and departure to and from the islands by a month. If I were a kolea, I’d just wait and hitch a ride back. A few weeks

Then, come to find out, that our dear friend, Jeannie, told us that she has it on good authority that a herd or flock of koleas were seen gathering at Kahului, Maui airport (OGG). Now think about this..what if those birds had frequent flier miles with Alaska Airlines and they were allowed to jump on the moving cargo ramp and tag along in baggage all the way back to their winter home. That would like flying first class instead of flapping your wings for 2,500 miles way back in the coach section.