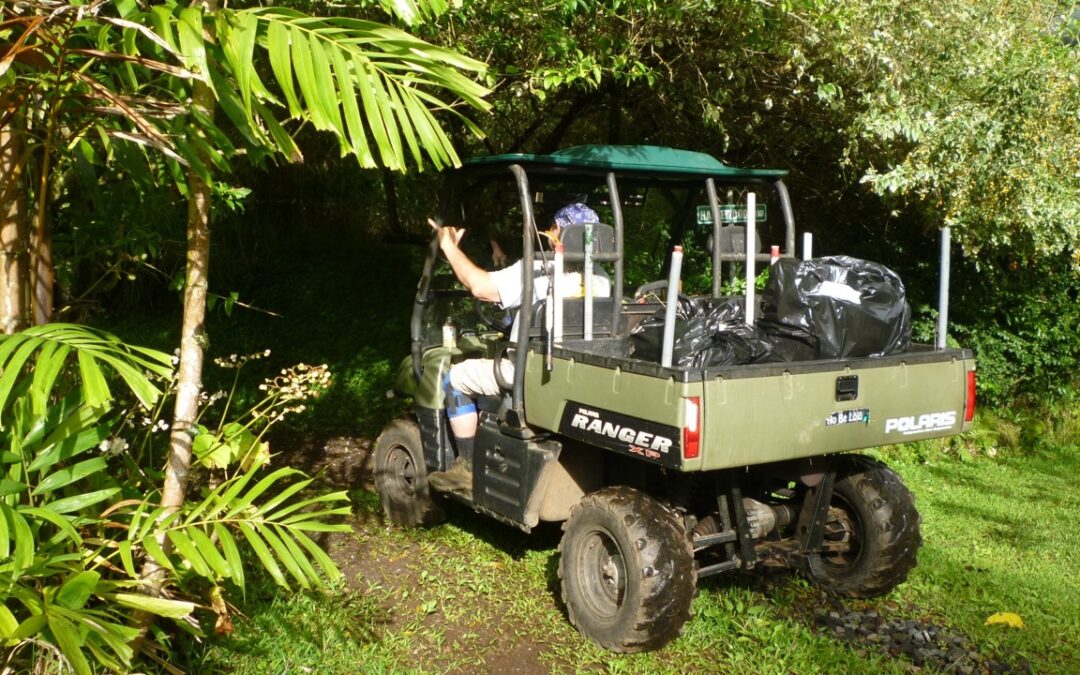 Today is Furlough Friday…but it’s really Wednesday. Husband Tom loves Furlough Friday on a Wednesday because..ta da..it’s trash day! That means he gets to gather up all of our trash (including recycle stuff–I hear the clanking of wine, vodka and beer bottles now). He also gets to use duct tape and stick it on each super-duper-jumbo-CostCo-size plastic garbage bag on which he uses his giant black marker pen to write our property number. Then he loads all the black bags into the back of “his” Polaris Ranger and drives one mile down the jungle road to the Hana Highway and puts them next to Hana Herbs’ flower stand. The happy county trash guys will come down the road in Hana’s one garbage truck, scoop up all the bags and head to the most beautiful dump on this planet. More on that in another blog.

But I do want to revisit how today (Wednesday) is Furlough Friday. About two years ago during the budget-cut crisis on Maui, the county decided that they would cut trash pick-up by one day a month thus saving a bundle of “moni” (money) by putting our two local trash guys out of work for one day a month. They put a new plan in place. It went something like this: each month trash would be picked up on alternating Thursdays and Fridays. However, some months have five Fridays, so in that case it would be a Wednesday and the final Friday would be a furlough. Now if the month had four Fridays, then it would be picked up on a Tuesday. I don’t want to say anything, but this sounds a little weed whacked to me, as in too much “paca lolo” (Maui Wowie). I bet even the geniuses at the Mac Apple bar couldn’t figure this out.

So..long “talk-story” short (pidgin-speak)..this past year, the county has now figured out how to pay our trash guys because people were all confused and leaving their pizza, Spam and huli huli chicken nuggets by the side of the road every which day but Sunday which caused the wild pigs to be in hog heaven upon discovering a great new food source besides grubs and centipedes.

So now there’s peace in paradise once again because it’s Furlough Friday on a Wednesday and I have a happy husband who got to use more duct tape, his giant magic marker and drive “his” Polaris Ranger down through the jungle!