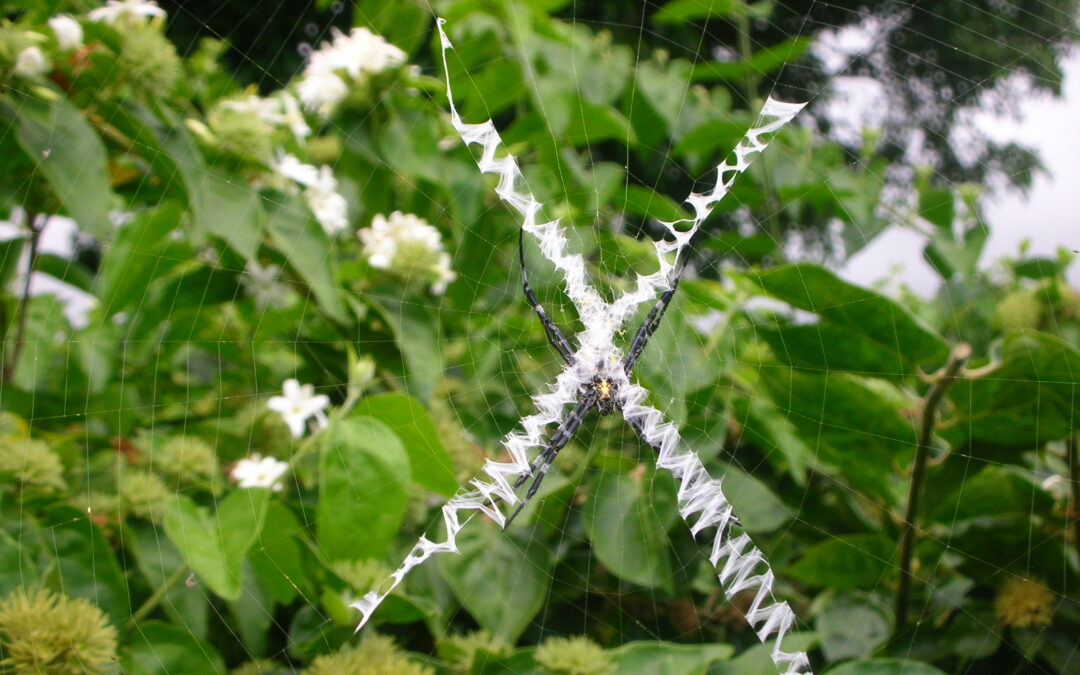 The joke making the rounds on Facebook this week goes like this: Research shows that if you’re afraid of spiders, you’re more likely to find one in your bedroom. I’m really afraid of Johnny Depp!  That’s funny. But for me personally, the punch line should be “I’m REALLY AFRAID of George Clooney!” Okay…even Tom, husband of 52 years, doesn’t take me seriously on that.

This week was a bad one for me involving spiders and a number of mowed-rage incidents while on my riding lawn mower. As I happily rounded a curve and drove between two palms–SPLAT!–my face was entangled and smeared with a crab spider’s sticky web. In retaliation for my ruining his snare, this little spiky spider then performed his “drop-down-your-bra” maneuver. What happened next comes with mixed opinions. Some spider people (entomologists) say that crab spiders bite you. Others maintain that their tiny spiny backs poke you and cause allergic reactions with huge welts that itch like crazy…for days! So the little itsy-bitsy spider turns you into its itchy-bitchy victim.

CRAB SPIDER WEB AFTER A NIGHT OF PARTYING.

One does not see a crab spider web until you’re in it and flailing like a crazy woman. That is this guy’s trick for getting into your bra. And his web is a mess…like he consumed a couple of Mai Tai’s and four beers. Three author friends, Toby Neal, Carolyn Howard Johnson and Barb Best have differing views on spiders. Toby, author of the spine-tingling Lei Crime Series (www.tobyneal.net), does not like crab spiders! Her great pleasure is to traipse through her Maui garden with a rubber slipper in each hand…preferably in the early morn when the webs glisten with the salty dew. The minute she spies a creepy crab, she squishes it between her flip flops as she slaps them together and gets great pleasure out of hearing the “satisfying pop.” No wonder Toby writes crime series that involve mayhem. …to be cont’d when Carolyn Howard Johnson and Barb Best have their say on spiders!